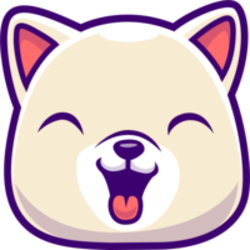 Kishu Inu current market price is $0.0000000026 with a 24 hour trading volume of $11.79M. The total available supply of Kishu Inu is 0 KISHU with a maximum supply of (Not Available) KISHU. It has secured Rank (Not Available) in the cryptocurrency market with a marketcap of $0. The KISHU price is -1.88% down in the last 24 hours.

KISHU INU was created in April 2021 with the goal of being a decentralized meme project with true purpose.KISHU’s mission is to bring popular cryptocurrency concepts to the mainstream. Unlike older, comparable projects, KISHU introduces holders to next-gen concepts such as frictionless yield, NFTs, decentralized exchanges, and more.Within the first month of its launch, KISHU made history by surpassing a $2 billion market cap and over 100,000 holders. This was an unprecedented milestone for a project of its kind, and proved the world’s belief in the project.KISHU’s list of products includes...$KISHU TOKENERC20 token that features a 2% redistribution fee to holders, so every time a transaction occurs, existing holders earn more $KISHU automagically.KISHU SWAPDecentralized exchange that features custom functionality and allows holders to trade anyERC20 token for another.KISHU CRATENFT Marketplace where users can stake Kishu to earn NFTs, we feature artists from community contests and those artists earn a portion of staking feesKISHU PAW PRINTWallet tracker where users can track their passive income earned through $KISHU, tokenprices, wallet balance, and more.KISHU sWAGMerchandise store to allow KISHU holders to proudly promote KISHU in the real world, with all proceeds supporting KISHU’s growth.